I got up early next morning to go back to Pattaya to meet Ad, Daz, Cliff and Skitt from back home. Found a cheap apartment a few streets back from the chaos, but it was owned by some CRAZY Russian guy! Managed to get in touch with the lads and met them for dinner and beer at 9pm. We headed to a few bars and watched Wolves beat Liverpool while playing pool. Got back in pretty late/early and got some rest in.

Next day headed for the only hangover cure, Big Mac Super-sized with Strawberry Fanta! Met Ad on the beach and chilled out until Skitt and Daz turned up. Cliff in bed, ill from the night before! We all went out for food on the night and headed back up Soi 3 for a chilled beer. The lads went for a massage while I went on the net for an hour. I headed back to the crazy Russian’s place to find a note on the door saying don’t use the Air Con due to me running up a big electric bill! He had been in my place and turned everything off and unplugged everything… so I used the Air Con anyway thinking he would never know. He did!

He said the next morning as I’m checking out that he felt the breeze under my door last night! You begin to see why he was the crazy Russian! Good job there was an inside lock on the door! Headed to the pick up point to go and spent New Year with everyone we had met in Vietnam. 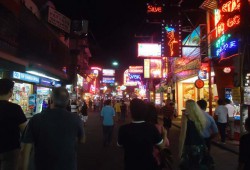