This deserves a blog post on its own as it was the most random night of drinking ive ever been a part of. We booked into snake village kind of knowing what to expect but was still taken back by it all.

Got to the village via mini bus and then got to hold some ‘Vietnamese Brown Snakes’ (even though after a quick google this does not seem to exist!) for about 10 minutes or so.

The group of around 25 people made it upstairs to start off the night by ripping a snakes beating heart from its body and then swallowing it! Only 4 of us got to do this but me and Jase were part of the lucky group. Another 4 people had the task of cutting the snake open, while still alive, in preparation for us. It tasted like chewing on a piece of fat, not a bad taste but still not something im looking to do again… (Watch me eat the beating heart here…)

We then had 6 various snake dishes including snake ribs and snake spring rolls. We were also told that if at any time you wanted to take a shot of the never ending free supply of rice whiskey, all you have to do is shout ‘SHOT’! God knows how many shots we had but it was a lot.

Cue me and Jase walking home, of rather being walked home, by Sarah and a guy who had also been snake village. We made it back in one piece and got into bed. I felt fine, very drunk, but fine at this point. At around 3AM I woke up and was a little ill… this happened twice more before the morning and kept me in bed for the rest of our last day in Hanoi. Good job id seen everything I wanted before!

Jase helped me with salt replacement and dry bread, Ed got me some fluids to help me get through. Thanks lads! We had already booked the bus to Hue so there was no other option but to get on another night bus looking rough!

We got onto our bus and I fell to sleep pretty much straight away. Until I woke up half way through the night to fine out the great news… (Sarcasm to be continued in the next blog on Hue.) 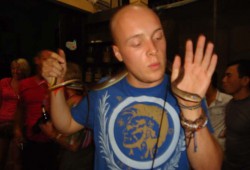