We decided it would be a good idea (for me, as you will find out… not so much!) to rent some bikes from a local shop and drive up and down the scenic mountains of North West Thailand. We picked up a bike each for around 3 GBP a day, but bear in mind I had never rode a bike before… not once! I had been on the back ONCE and that was it… so as you can imagine I was shitting myself! Here are the highlights/low lights/arrrgggggghhhhh from each day:

We went and picked up the bikes and I had the quickest cram session ever. Throttle, break, ignition… OK your ready! Easy! Just like riding, well, a bike. We filled up with fuel and got on our way towards Pai. Straight road out of Chiang Mai followed by a left onto some country roads. We stopped at this huge waterfall on the way, must of been over 100 ft high at least. We swam in it for 30 mins then set off back on the road to Pai. Had lunch at road side cafe in middle of nowhere, more fuel and back on the road after a few scenic photos. We arrived in Pai at about 5pm and tried to find a bed for the night. There was a music festival on in Pai and everywhere was full or over 1000 BHT for a night! We eventually found a place owned by what can only be described as a ‘massive mince-bag’ (Edmund Short 2010). 300 BHT for a night, even though all 3 of us were in the same bed… it was cheap cheap and we really did not care! We went out for some food and checked out the festival while the weather held their end of the deal and soaked us through! Few beers and then hit the sack.

Up early to cover some ground after none of us had any sleep due to our room being on the main road. Had a free coffee, who knows why, I don’t even like it! Filled up with gas and then hit the road again into the mountains from Pai to Mae Hong Son. We saw some amazing views along this spaghetti like road carving through the mountains. Slogging it up the hills and then belting it down the free roads into the sharp hairpin like bends. Not had this much fun since last week in the Jungle. Such an amazing experience! We then climbed up and up and up until the ears could take it no more… POP! We got somewhere near the top and stopped to admire the view, take some photos and drink some water. We set off going down the other side of the mountain into steep bends. We had low fuel and all agreed to take it steady and dropped our speed to 40/50 KMPH. I was in the middle with Ed in front and Jase behind. A few cars came to overtake us and forced us over. I caught some gravel on the side and my bike came from under me. Me and the bike promptly made an exit from the road down a nice deep, dirty ditch that was lined with stone! Luckily I got up straight away but was cut up pretty bad. Jason stopped straight away while Ed turned round after catching my 3 somersaults and a pike into the ditch through his mirrors.

They both helped me clean my cuts as best we could roadside and wrapped a bandage around my right knee that was, and still is, in pretty bad shape. I then had to lie down for fear of passing out from the shock. Luckily for me only surface damage to my arms, legs, hands and side. Nothing on the moneymaker… phew! A very kind Thai family picked me up and their daughter rode my bike down the mountains. It kept going round in my head how I’d messed the trip up for everyone… thinking now, it could of happened to anyone of us and was just unlucky.

I rode the rest of the way into town, found a guest house and then Jason persuaded me to go to hospital and get clean properly… he was right, I needed to man up and get in there. F**k me iodine hurts! Especially when they are scrubbing it through to my knee cap! Sweating just thinking about it. We met Jerad (USA) back at the hostel and went out for food and a Sprite. Beer off the cards for a while with my antibiotics. They had few beers and we all played pool. I decided to call it a night after a long day in the wars. They stayed out for a few beers.

Woke up after very little sleep due to having only one sleeping position and countless cuts covered in iodine! We decided that it was best to carry on with the trip but get back to Chiang Mai half a day early so I could fix my bike and get another check up at hospital. I went to the hospital to have new dressings in the morning while the lads stayed in bed and got some more shut eye. Another scrub and more iodine was the most fun Ive had so far! Naaaaaaaat!

We set off towards Khon Yuam through a huge farming region and loads of corn fields. After a while me and Jase were off in front when we stopped… Where was Ed? We gave him a min… then headed back down the road to see him shacking his head, pointing at his flat back tyre! Shit! Middle of nowhere again and this time a flat tyre. We moved on slowly to find a village to fix his bike. After about an hour and many failed attempts we found a garage that promptly fixed Ed’s and my bike for about 3 GBP each! Bargain. Worried about how much daylight was left we had to find a bed, and quick! We jumped on the bikes and eventually found a B&B 25 KM out of Mae Chaem. It was basically a shed with a bed. And a toilet. Food, hot choc, cookies shots of tea and then to bed. Friday night and we are in bed for 9.30PM. Hardcore! We did make a lame techno style song on Ed’s phone but all went to sleep pretty quick. Until Jase kicked out in middle of night and smashed my knee. Ouch! followed by sorry sorry sorry, you ok man? Urrrggggghhhhhhgggggghhhhh… zzzzzzz ….

We woke up very early and decided to skip brekkie until Mae Chaem. Fueled up and got to it as we had a lot of ground to cover. Got to Mae Chaem and got toastie from 7/11, shredded pork and salad cream sounded good in my morning daze, in reality it was shite! We took a photo of a conflicting sign saying how far away Chiang Mai was and then headed to Doi Inthanon, the highest point in Thailand at 2595 KM above sea level. Got to the top after very slow slog up hills that our bikes were not made for. When we got to the top we were the ONLY people on peds. Everyone else in trucks, small coaches and cars. Everyone staring at the bag on my leg protecting the bandage from water and dirt! To be honest I looked like a complete tool, but needs must! 12 degrees at the top! 32 at the bottom!

We headed back down out of the clouds, after 2 hot chocolates, into the sun. HOT! Arrived in San Pa Tong around 60 KM south of Chiang Mai and had some cheap lunch. Dodged in and out of traffic on a runway type road towards Chiang Mai, Thai drivers are complete nutters! Worse than us! Back at Libra Guest House for 3.30PM and back to the hospital for more iodine and doctors fees. We then went for a BBQ put on by our Thai friends Aom, Dee and Am. Food was special! I mean it was amazingly good!

All in all we covered just over 600 KM (400 miles-ish) on mopeds! We had so much fun and saw some scenery that is second to none Ive ever seen before. Even though we had our ups (the hills) and my downs (the ditch) we would do it all again at the drop of a hat. Just this time in the middle of the road, no ditches!

We took bikes back next day with me in long trousers and long shirt armed with a plan to make a quick get away! I stayed out the way so they could not see the limp, Ed got his passport and we got the 1st TukTuk we could see. GO GO GO! Got away without paying another BHT for all the damage I caused to the bike. Result! 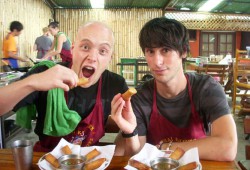 Top 5 Things To Do In and Around Chiang Mai, Thailand 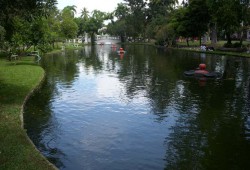