What an amazing 3 days in the worlds largest salt flat! It was freezing cold most of the time but the landscapes were truly phenomenal.

The Town of Uyuni

There really isn’t much to do here apart from book yourself on a tour to the Salar (salt flats).

There was one amazing local restaurant near the market that had a huge rotisserie outside and serving roast or fried chicken or grilled pork chops. All were amazing!

Fart noises are universally funny. I know this from sitting in the above local restaurant when two 60 something Bolivian guys came and sat opposite to us on the same table. Once he had his food he squeezed the ketchup and all that came out was a bellowing fart noise. Both guys, Brogan, anyone in earshot and I burst into uncontrollable laughter. 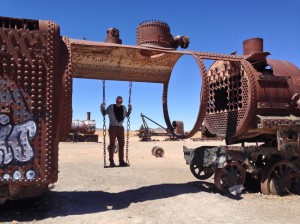 We started off at the train graveyard where you guessed it, dead trains were laid to rest. Its probably the only thing you could do without a tour as its 3KM out of Uyuni. Pretty cool place too.

Next we headed to the very edge of the Salar and saw the old, now a museum, Salt Hotel.

After some lunch we headed deep into the Salar to get some of those iconic photos and see just how vast the area was. We spent about an hour here but the mind goes blank when put on the spot to get an interesting photo. Its even more difficult to think of an original idea. 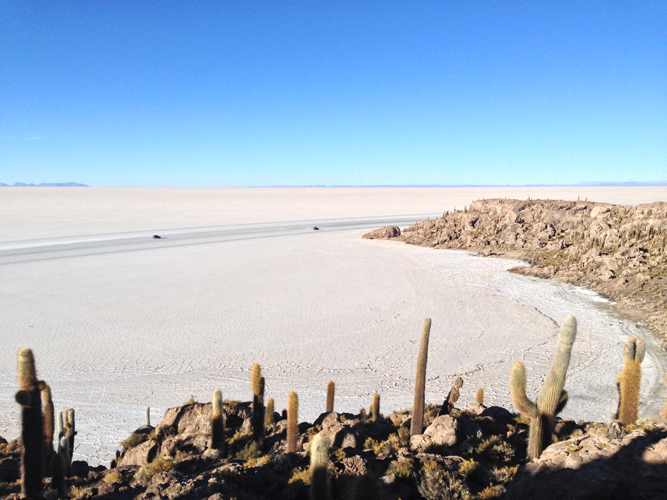 An island of cactus was next which is mind boggling. You have all of this salt where nothing at all grows the slap bang in the middle there is an ‘island’ covered with cactus and other desert plants. 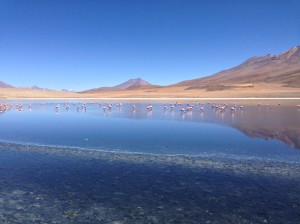 After an early breakfast we headed out on the road again stopping in a few places. First we stopped in a valley with a lot of volcanic rocks surrounding us to get some pictures of the surrounding area.

On the way to our next destination we saw the international railway between Bolivia, Argentina and Chile in action. We were speeding alongside a moving freight train then stopped ahead to watch as it sailed by.

We then stopped at a lake full of flamingos for lunch. The lake absolutely stank as you got closer, good thing we ate lunch a little further back! There were some very rare flamingos in the area that were thought to be extinct (James’s Flamingo) but there are some remaining colonies high up in the Andes.

We reached our highest peak that afternoon, stopping at 4700m above sea level. I was one of a few that had a headache from the altitude but after chewing on some coca leaves all was better. In this area we saw a rock that had been calved by many volcanic eruptions into the shape of a tree. After some climbing of the bigger rocks in the area we were on our way. 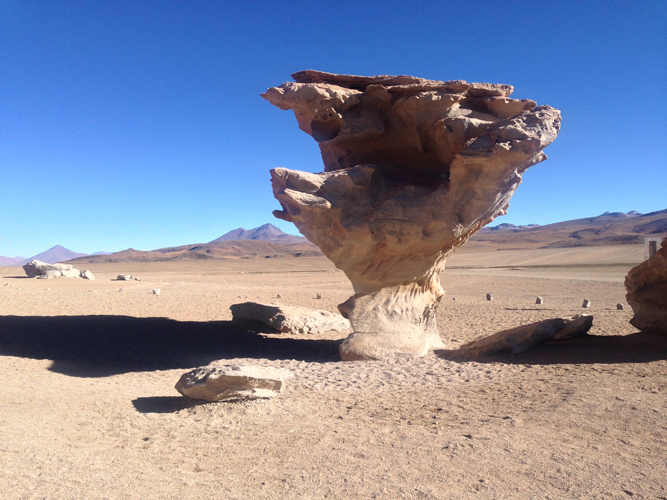 The final lake of the day was a huge red lake that was also full of flamingos. We even saw a mini tornado just as we were pulling up to the lakeside which I managed to get a photo of from the safety of the car.

Getting up at 4:30AM is not my favourite thing. Especially when I was up drinking with a Brazilian until around 2AM. So needless to say the car journey to the geysers/hot springs was a funny one. We had the music blasting and myself and the others in the car, apart from a miserable person from east Europe (no names please), were singing at the top of our voices. ‘Misery’ wasn’t impressed. 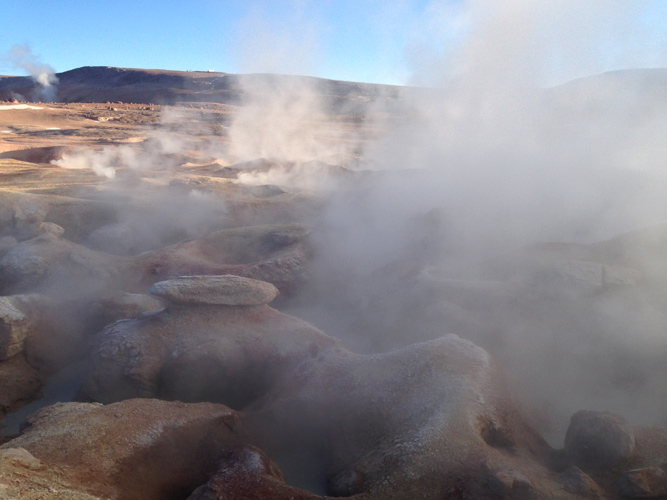 First to the geysers which at around 5AM were steaming and throwing boiling hot water into the air. We were warned that 2 lads had fallen in sometime ago and died from standing too close, so we all kept a little bit of distance from the loose gravelly edge.

The hot springs were exactly that and we got the first touch of water to our skin for over 48 hours. A great way to start the morning and to feel refreshed for the first time in a few days.

Next was the loooong drive back to Uyuni which wasn’t so bad. We stopped off for lunch half way through the 7 hour drive and also a stop off at a rock canyon to break up the journey.

All in all it was a really great trip with a core group of great people, just one that didn’t really look like she was enjoying herself. The only downsides were the amount of time we spent on the actual salt flats (2 or 3 hours) and the amount of time you spend driving in a day (most of it). 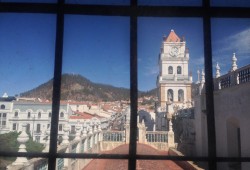 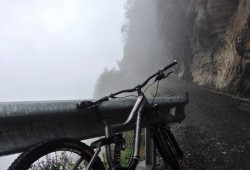