After the first of what will probably be many night buses (I don’t miss that aspect of “travel”) we found a guest house that had a pool, a great choice with the days that followed, most of which were between 33 and 35 degrees. Sweltering!

We had a good half day to explore the town of Puerto Iguazu and decided to walk to the 3 points. We could stand in Argentina and view Brazil and Paraguay, both situated on the other side of the river. The tourist information centre said this would be a 20 minute walk, they lied. It was at least 33/34 degrees, down a steep slope and then we climbed back up a little more gently, but for the heat it was horrid. The reward was a few good photos, a beautiful view and a well deserved rest in the shade! 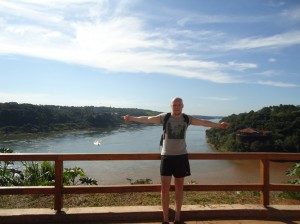 Next day we wanted to see the Natural Wonder of the World, Cataratas del Iguazu (Iguazu Falls). A bus ride, a short walk and mini train ride and we were in the park. I was blown away, the power, the beauty of the place, unreal. Birds of Prey circling above, there must have been a hundred of them easily (they are on the photos but my camera is shite).

It was honestly like walking into the set of Jurassic Park. We could of easily stepped back in time, apart from all the man made walkways and viewpoints of course! 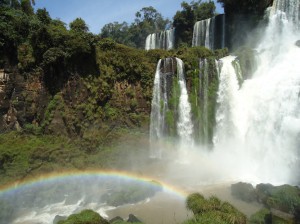 There are a few circuits to walk to see various different falls so after the Upper and Lower Circuits (just look at the pictures, no words of mine will do them justice, rainbows everywhere), we even saw a wild Cayman. Mid Lower Circuit we did the Aventura Nautica. Basically a high powered boat takes you under some of the biggest waterfalls there. Brogan has a waterproof camera so I will post the video as the next Video Blog [view the video blog here]. Soaked, cool, oh it was amazing! A day of walking round in mid 30’s plays games with the underarms, face, practically anywhere that sweat will come from, it does.

I then decided it would be a good idea to walk down to the 3.5km track that didn’t have any man made walkways, it was literally a jungle path. 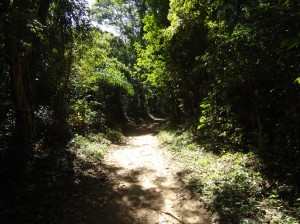 Ants the size of your thumbs, spiders webs everywhere and some horrid clicking noise that even had me on edge, and I love this sort of stuff! It didn’t help that I had read in 1997 a Jaguar had killed and eaten someone in the national park, and this was perfect Jaguar territory. I didn’t tell Brogan that fact. It turns out Brogan doesn’t really like jungle paths… bugs, flys, ants, trees, butterflys (anymore)… basically, it if crawls, walks, flys or makes any sort of noise and her feet are not on tarmac and all areas of skin are not covered, the waterworks begin.

After much persuasion 20 meters (generous!) from the entrance to the trail that she would regret not doing it, we walked the 3.5km (waaaay further than anyone could ever imagine!), one way, to this little tiny waterfall, I spent about 3 minutes swimming under it until I whacked my side on a rock under the water and it was time to walk back. 3.5km later, Brogan was still alive, nobody had been eaten, stung or chased. We even saw a little pig like creature on our way back, probably some kind of pig. Even he looked pretty cool about the man eating Jaguars. Probably because “Pig like creatures” were off the Jaguar menu. He did look rather smug, looking back.

Due to my poor lack of judgement on how far 3.5km really is to a waterfall that was more like a shower compared to the rest we had missed the last train to look down river. So we headed back a little disappointed at that, but very pleased at what we had seen already. Great day, the photos don’t really do it justice. Just go and see it, you won’t regret it. 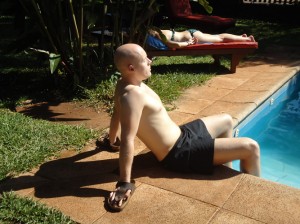 Next 2 days involved a lot of slobbing around the pool trying not to move, it didn’t work, it was so hot that if you didn’t sit in the pool you were sweating. The shade was useless. It was that hot that I developed a case of Sandlehand. The nights weren’t any better, it was still late 20’s at 10PM. Booked our bus to Salta to get some rest bite from the heat (we hope).

On closer inspection in the book, Salta is there, hidden away in the Argentina section! I strike again! 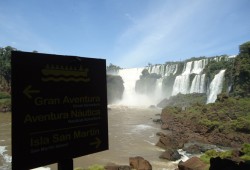 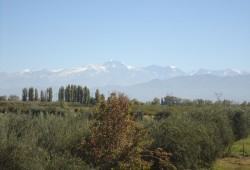 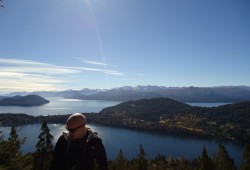