São Paulo is a huge city. I mean, really big. We found it almost impossible to walk anywhere but the metro there is pretty bang on and the hostel we stayed in, São Paulo Street Hostel, was pretty amazing too.

We took the time to visit the Football Museum at the Pacaembu Stadium (Estádio do Pacaembu) and while the World Cup was on it was free in the week.

It’s great to walk around the museum but the major downside was that there was hardly anything in English. You can get a free headset walking tour around the place in English but we thought we would be able to read it. We were wrong. 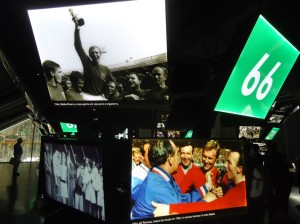 There were artefacts from all of the different World Cups and you could watch people talking you through their favourite goals from past years. A great day to keep in the spirit of the current World Cup in Brazil.

My favourite part of the museum was right at the end where you could test your speed and accuracy against a computer wall and goals. I managed to beat the virtual goal keeper with a strike of 111KMPH (69MPH). 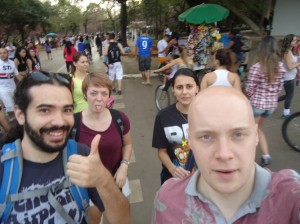 So after getting on the Metro to meet friends we began to doubt we were going to the correct station. With no WiFi we had to try and do it the old way, by using our brains. It turns out it’s not all mush up there and we met Flavio and Sarah, albeit 20 minutes late.

So after learning that it’s perfectly legal to drink on the streets of Brazil we picked up some cans and headed for the park. After seeing the huge Monumento às Bandeiras (monument to the flags) just outside we entered the park to find pretty much all of São Paulos 22 million residence there with us. It was Sunday after all and, as is the case in most of South America, there is nothing to do but chill on the weekend.

The park is a pretty cool place to hang out, loads of people skating, boarding, trying to take your toes off, playing frisbee, playing football and the rest are sprawled across the grass, pretty much like we were. There are few museums in the park too but we didn’t see those.

It was Brazil v Colombia. We were with one of only 10 Colombians we saw all day. Thank god Brazil won. We arrived very early to the fan fest knowing that it would be packed out for the Brazil game later on that evening. So there wasn’t much else to do but have a wonder around the fest with a few beers in hand. 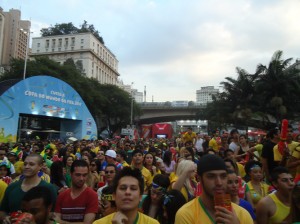 10 beers and countless bathroom stops later the game was about to kick off. The place was absolutely packed but luckily the screen was huge and could be seen from everywhere.

Great atmosphere in there, especially as Brazil were winning the game. Sebastian, the Colombian we were with, was getting some light hearted banter from the swarms of Brazilians surrounding us. All good natured and everyone, apart from the Colombians (understandably), enjoying the game.

Cups or No Cups

So we spent our hard earned money getting a little tipsy while collecting our souvenir cups along the way. We must of collected 11 or 12 cups with the intention of keeping one each.

We left them next to our bed on the floor and after returning from a day around town came back to find our cups had all been cleared away, in the bin and collected by the council that day. 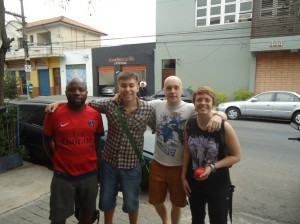 We would probably of really liked the view from the top, except we weren’t allowed up. Word of advice if you want to go to the top, remember to take your passport! It’s a random rule and I have no idea why, but you can’t get past the lobby without it, so don’t do what we did and miss out.

All in all São Paulo is a nice city with a few things to do. There is a free walking tour that you can also do but we never got chance, always a great way to get to know a city. 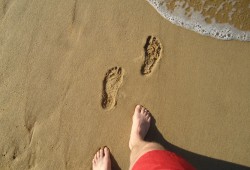 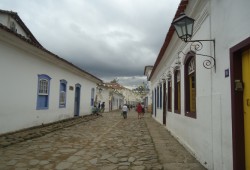