So with the World Cup well and truly over we were ready to take on Rio de Janeiro for the second time but closer in to do all of the touristy things people associate with Rio. We stayed in quite a nice part of Gloria close to the centre of Rio, but it still looked a little sketchy as soon as the sun went down!

We found a really nice hostel but it was definitely not a 5 minute walk (as advertised on a hostel booking website, lets call it HostelBookingers) from the metro, it was more like a 15 minute hike with all of your gear on.

There were a few mini local type cafes at the bottom of the hill with a mini market each day selling fruit and odds and sods. I would definitely recommend staying in Gloria, seemed pretty safe and was a good distance from any areas we had been warned away from. Still, I wouldn’t fancy walking down the street at night on my own as there are many stories of robberies around the streets of Rio. 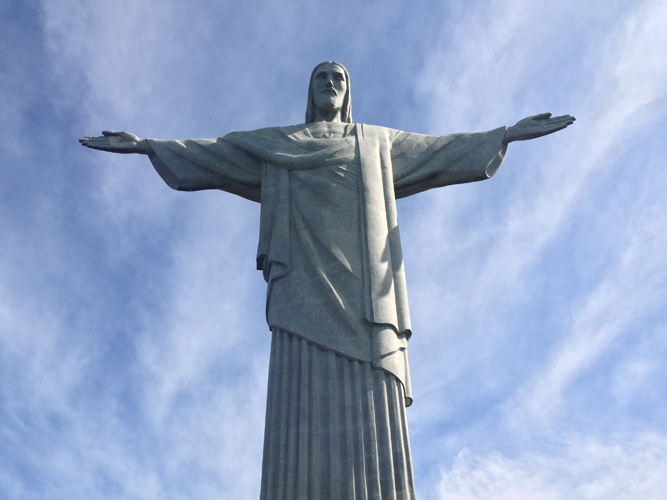 Cristo Redentor, or as you might know it, Christ the Redeemer is better for the views than the actual statue. I mean the views up there are absolutely stunning, you can see a huge chunk of the city from there and get some great photos. The only thing was, I almost had no photos to show! 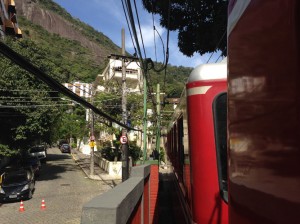 We got up nice and early after I had made sure the batteries, including spares, were fully charged. Caught the local bus for 20 minutes to the bottom. Brought our ticket for the train to the top and got in line. Then the camera breaks! So we had to change our train ticket for a later time, catch the bus back to get my iPhone, then get the bus back again to stand in the train queue once again!

Drama over we boarded the train to the top which is really nice and you are treated to glimpses of the spectacular views in parts of the way up. The top of the Cristo is overcrowded with people trying to get photos next to the statue, so much so there is little to no chance of getting a photo with just you and Cristo together. People are spreading their arms through others photos without a care in the world. Very annoying actually.

But step back from the statue a second and look over the city and even though people are jostling for a space at the front the feeling is a little calmer and when you get to the front you can see why. We were lucky with our clear day so could see for miles in most directions. 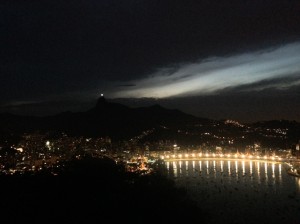 Pão de Açúcar, or Sugarloaf, is spectacular. For the views of Rio this is way better than Cristo. Even though it costs more to get up there, there are less people and you can see the whole coast down to Ipanema beach. My top tip would be to do Cristo in the morning then get over to Sugarloaf for the sunset.

The sunset for us wasn’t too great as some clouds has began to cover the backdrop but as soon as the sun went down and the lights began to light up the city, the view of Rio was beautiful! 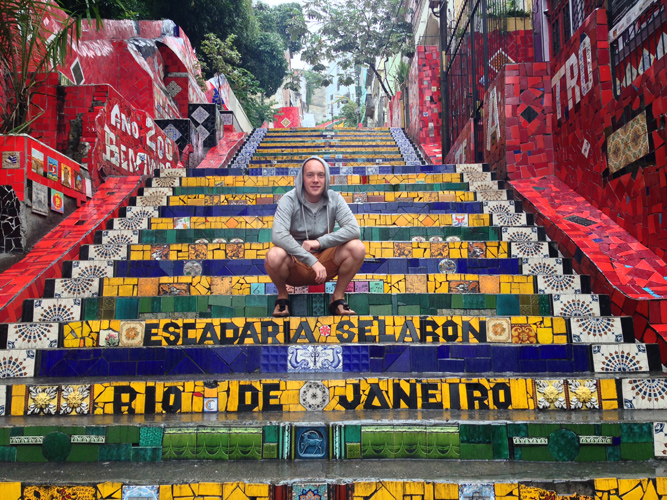 Snoop Dog and Pharrell did it, so I thought I would enhance their social standing and do it myself. So we did. We sat on a brightly decorated set of stairs and posed for pictures. Luckily for us, as was the case for Snoop and Pharrell, there was no-one else there so we got some great ones.

The story behind the stairs is that the artist, Jorge Selarón, asked for tiles to be sent from around the world to complete this ever evolving piece of art. Jorge Selarón died in 2013 when his body was found on the steps he created with burn marks over his body, still nobody knows how he died. 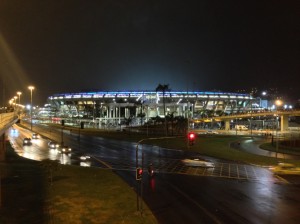 So it was derby day in Rio with Botafogo playing Flamengo at the Maracanã. We got some tickets and went down to watch the game, soak up some South American football atmosphere and get some photos of the stadium.

The atmosphere in there was un-real and I’m pretty happy that we sat with the Botafogo fans too as they were by far the loudest even though they were 1-0 down for most of the game. A great night of atmosphere but just a shame the standard of football wasn’t as good as we are used to in the Premier League.

We got a stark reminder that we should not be off our toes in South America in the form of a bus journey from hell. We were leaving Rio on an 18 hour night bus to the seaside resort of Porto Seguro when our coach slammed on it’s breaks. To avoid hitting the local bus in front of us the driver swung the front of the bus into the middle lane of the 3 lane motorway.

Being sat on the right side of the bus and now at an angle across the motorway we could see 3 or 4 cars with hazards on and some people around them, we thought it was a crash but when our bus started reversing down the motorway along with the local bus to our side and cars and lorries doing the same we started to think it wasn’t that simple.

We had wondered why there was an armed Policeman on our coach at the start, we now knew why as he was telling us to get our heads down and the curtains closed while peeping through the drivers cabin window through a curtain. The Brazilians to my left were stuffing money and belongings into their underwear so I thought it might be best to do the same just in case. So down went the credit card, some cash and my iPhone. Luckily we had reversed enough down the motorway for them not to come onto the bus.

We managed to get away as a lorry pulled up by the side of us, slammed his foot down and went for it, our driver followed suit and we were back on our way. For the next 16 to 17 hours every time the bus slammed on its breaks, mostly just as I was nodding off, that sinking feeling of the same happening again set in and I was wide awake. Great journey!

Oh and on the same journey, before the above happened, someone got stung or bitten on the bus, not knowing any Portuguese we had to sit there thinking why the hell the Policeman was walking up and down the bus with his hunting knife out! Not the day to of worn open sandals I thought! We didn’t find out until the next morning that it was only (only, like I wouldn’t of run like a little girl) a wasp. They were found and destroyed by the Brazilians on board, no real need for that hunting knife!

Well, Rio de Janeiro is one of the most enchanting cities I have ever had the pleasure of visiting and would 100% return. There is so much to do we still missed out things in favour of doing others, albeit the weather was a factor too as it was miserable after the Cristo Redentor and Pão de Açúcar day. An amazing city that provides all the thrills and spills you would expect of a big South American city, just don’t visit with a weak heart, or if you do have a weak heart, prepare to have it tested fully to its limits with the views and robberies alike. 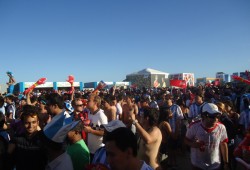