Dropped off in Sapa by our bus and had no clue where we were and where to go, just told end of the line… see yaaaa! After waiting around with Brice we eventually got picked up by a mini van and taken to the hotel. Hotel room had heated double bed and a single. Mine and Eds turn to share, unlucky Jase! Had a walk around the town and brought a woolly hat, it was freezing up in the mountains!

After a quick look around town we headed to some mountain villages to see how they lived and what they did on a daily basis, we took part in some authentic dancing on stage with some girls from the village. After walking through the mountains we made our way back to the hotel with a packet of sweets to add to a bottle of Vodka already chilling in the fridge. After lunch we headed back into town to have a stroll and find somewhere to have a beer out of the cold.

Made our way back for set menu meal at the hotel and then got on with drinking our sweet flavored Vodka and Coke. It looked like, well, watery poo in a glass but tasted like very sweet watery poo. It did the job as we played Cardinal Poof drinking game in the room. After making quite a lot of noise in the room we got a knock on the door from a French woman asking us to keep it down. Probably the funniest drinking game ive ever played! We were almost in tears.

Made our way into town to find a bar… we were the only westerners in there and quite a few Vietnamese. We got talking to some Vietnamese girls, one of them punched Jason in the face for no reason at all! Made it back to hotel pretty drunk and got some much needed shut eye.

Next morning we trekked down the mountains that were extremely muddy, everyone else paid to rent wellies… Not me though, the ‘smart one’ decided that sandles were perfectly acceptable footwear! I was right and wrong at the same time. It was a lot of fun falling over twice and having two guides old enough to be my mom’s helping me down the hill, they had pretty good balance, I, did not. But it also meant I now had to buy something from them both… a bag and what can only be described as a purse was brought. Don’t ask.

On our way back to the hotel our bus got stopped by a huge crowd of people in the street, option 1 wait on the bus until we could get through, or option 2 walk back to hotel… we started to walk through the crowd and saw what the commotion was. One of the bars in town was on fire and burning down. One fire hose trying to put it out was not very effective. Same to be said of the neighbors on both sides filling buckets of water and throwing them over the half of the bar that was left. Never seen anything like that before, quite disturbing!

Got back to the hotel and got a quick shower, some food and then waited for the bus back to Hanoi. 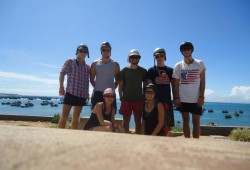 Photo of the Week, Duck and Cover, Mui Ne