After a long journey from Cameron Highlands through KL to the border we got off the coach and got ready to go through customs. We all (Me, Brogan, Marcus, Jase and Ed) walked through and filled in the paperwork for our visas, stamped and through to baggage check. Singapore being one of the strictest nations on earth (they don’t allow chewing gum into the country!) had an x-ray machine scanning all bags.

As my bag went through the officer noticed something in my bag and asked me did I own an M-16 round. S**T! I had brought a used bullet in Vietnam from a war museum for less than an English pound. They found it and detained me while they did background checks and decided if could enter the country or not. 2 hours of waiting after a very long day traveling (set out at 8AM and it was now 10PM!) had me very stressed and the thought of spending a night in a cell (would of been a 1st) made things worse. I eventually got released after interrogation of where I was staying, what I was doing and where I was going next. I got given a piece of paper with a number and the name of the chief of police with instructions to call him the next day at 2PM to find out my fate.

I got out from the border to find that my friends had gone. Told to leave by the police and instructed that Id been released and was on my way to Chinatown via the bus. Already stressed out I decided to get a taxi as I wanted to get into town as quick as possible and forget the last 2 hours of my life. I eventually got to Chinatown and found the guest house. High on my list of things to do was have a beer… several! 7/11 and the 1st taste of Singapore hit me… 4 times the price than anywhere else! Does not matter I’m having them anyway.

After meeting back up with Brogan we decided to go out and have a few more beers and to cool off. We got sat next to two guys, one a restaurant owner from Singapore and the other his friend from China. They offered to buy us a beer and from midnight to 3AM mine and Brogan’s glass’ never got half way down before they filled it back up! We were a little worse for wear and after learning a little Mandarin retreated to the hostel.

Up late the next day and after a trip to the pharmacy it was time to call the chief of police. Short call was the exact result we had hoped for. Slap on the wrist, don’t do it again, enjoy your trip. Phew! We headed off to explore Singapore and took the cable car over to Sentosa island. Back to the mainland and a Nutella shake later we headed to the hostel. Out for an amazing burger at the Irish bar and we headed down to the harbor to watch the festival. Huge stage with dancers and singers all there to celebrate Chinese New Year. We walked around through the heavy showers that were on and off until midnight. At 12 we witnessed the best firework show any of us had ever seen. My 1st Chinese New Year shall never be forgotten, it was unreal. We headed back to Chinatown and watched a show in Chinese so we had no clue what was going on, they all seemed to be laughing though, god knows what at though!

All up early-ish with everyone keen on going to the zoo. We had been told by several people that the zoo was a must see so we headed there on local transport. When we eventually got to the zoo we realised a lot of other people also had the same idea. We eventually got in and started our way around. The zoo is amazing, it really is like a nature reserve. The monkeys can go almost anywhere in the zoo as they have a free reign of the trees. The lions have a huge space as do the white tigers. We saw, amongst others: white tigers, lions, cheetahs, zebra, giraffe, snakes, lizards, komodo dragons, pygmy hippo and sea lions. The zoo was vast and even had its own safari on a huge piece of land next to the zoo. Singapore zoo is highly recommended to anyone going to the area. Back to the hostel for a power nap and then after some cheap local food we headed to the world famous Raffles. We headed to the Long Bar and ordered the also world famous Singapore Sling cocktail which is most defiantly the most expensive drink I have ever brought at 34 Singapore Dollars (17 English pounds!). Back to the hostel after 1 drink and me and Brogan sat up deciding where in Indonesia to spend our last week together. We settled on a small island called Bintan, not far from Singapore. 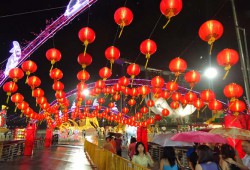 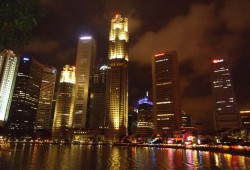