Probably the nicest of all the beach cities we have visited in the whole of Brazil, apart from obviously Rio de Janeiro which might not be beaten by any city in the world that has beaches.

There are plenty of nicer little beach towns, like Porto de Galinhas, around Brazil but the beach cities have little to do apart from sit on a beach with a set of high rise flats behind you.

I like to judge a great beach on not just the sand and sea itself, but the backdrop you get with it. In the most cities, Rio being a huge exception to this rule, the backdrop is mainly high rises and the odd restaurant here or there. The beach towns are much nicer, tourist friendly places, I mean its not like the cities are a challenge, because they aren’t, but they have no character.

I liked Natal, well it was actually called Ponta Negra as it was on the edge of the city, because it kept some character and where we were still had a small town feel to it even though there was the odd high rise in the backdrop.

The beach is really nice here with a nice set of sand dunes at either end which I was very curious as to why I saw nobody walk up them the whole time. Turns out as we got in front of them to have a go at getting up, what would of been a great view of the city I’m sure, there was a sign saying “Prohibited Access, Risk of Death: Area of Impact of Rockets and Missiles.”! At the end of a public beach, a rocket and missile test area.

Watch out for the sharks nibbling your feet and the rockets hitting your head. No, I’m kidding, you probably won’t find a shark in the water. Probably. 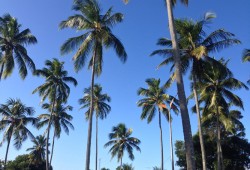