We arrived in Bali after a 30 minute ferry ride and get straight on the local bus to the capital. As Marcus’ icy facade started to melt I could see it was taking longer than it should. The woman next to Jase fell asleep on him!

We arrived in Kuta late on and headed out for food after finding a guest house. For a burger and a beer at the Auzzie bar and then headed out for more beers. After a deserted rock club we found a 5 story nightclub and were persuaded to go in due to the amount of free drinks we could get. We all, apart from Ed who looked after a girl for drinking too much, got suitably drunk off Mojitos and Heineken. Me and Marcus argued with the bar staff as they would not honor our free drinks. Funny thing was that we were still working off Java time, not Bali time which is an hour ahead! So we were wrong, they were right! Ooops! I ended up falling asleep on our balcony again, Jase was walked home by Ed and Marcus got a moto-taxi basically across the street… not basically really… it was across the street!

Up late and had a stroll around the town looking in the endless shops that sold the same old sh. I was looking for some new Ray Ban’s as the other 6 pairs of fakes broke, seemingly on their own. The 1st offer was 300,000 Indo Rupiah (20 pound for fakes!) and when they got laughed at they quickly dropped their price to 25,000 (1 pound 50!). So you can see why I laughed in the 1st place! After a nothing day me and Jase went back and I got all the Cambodia advice I needed.

Jase and Ed went surfing while me and Marcus mooched about looking for things to do. We found pretty much nothing apart from shops selling the exact same things or bars. So we met up with Ed and Jase and came to the conclusion: If you dot surf in this town, there’s only one other thing to do, drink. Soooo at 3PM we headed to the bar and did exactly that! Played killer and drank. We drank until midnight and I decided, because I wanted to watch the Champions League at 4AM, it was wise I got some rest. I think you can see what happened next? That’s right, I slept in and missed the match.

We checked out the next morning and headed to the inland town of Ubud. It was a welcome change from Kuta with its craft shops, cafes, architecture and well thought out businesses. We liked it so much we spent 10 days there.

After a day of walking round the craft shops and testing out the local food we decided to get motorbikes and explore the north. They only had auto’s which I think we were all disappointed about. Life goes on I suppose. Rice paddies, private temples and the huge GitGit waterfall were the highlights of the day. Out for a few beers and bumped into American’s that Jase, Ed and Marcus met while I was in bed ill in Jogja. After a few beers we headed home to be fully prepared for our 25KM cycle tour.

After our buffet breakfast, which was devoured, we learnt about trees and coffee, both pretty much in the not pile for me on things to learn about. “This is a male coffee bean, and this is a female coffee bean”. I’m not joking, there are males and females in the coffee world! We cycled down county roads, through rice paddies and then a coconut forest. We visited a family home and got an insight to their lives. Most interestingly of all they keep the dead body of a relative in their home, for a month! We also saw lot’s of Shopped Woud! Me, Marcus, Ed and Jase were then the only 4 out of 40 odd people who wanted to do the 10KM uphill back to the restaurant for lunch. It was good and the buffet lunch was demolished as well!

After learning the day before that Cock Fighting (Chickens) is both religious and for illegal gambling, the owners massage them (the chickens!) for days on end before a fight to get them ‘psyched’ up for a fight. On my way back to the guest house from town I saw two guys massaging their Cock’s (Definitely chickens!!) and then them almost fighting on the street! We were talking chickens, OK!

We all met up and went into town for some lunch and agreed to have beers at the hostel to make things cheap for everyone. It was my 25th but also the last night we would all be together for a long time! We got beers and ice and set them up in the sink to keep cool. After arguing about the rules we eventually played cards and were on our way. Back to the shop and another beer each whilst getting Vodka for Circle of Death. The game lasted about 30 minutes as Jase managed to pull the 4th King with over half the cards left, good job as we were out of drinks and were all very hungry, not drunk though… well… maybe a little… probably very. After food and a beer we headed back as the town was shutting down for the night.

Ed left for the Gili islands the next morning to leave me ,Jase and Marcus in Ubud to do what we do best. Eat burgers and chill out. The remaining days panned out much the same, eating, buying gifts and reading. Marcus left to go to Hong Kong the day before I left, going to miss the Swede after 2 months of his company. Ed got back the next day and it was my turn to leave. Hugs all round and in a flash that was it, the end of 5 months together. The most epic 5 months of my life so far have revolved around Ed and Jase, going to be weird in Cambodia without them.

Oh and just so Jase doesn’t get away with it, the day before I left he got bird poo all in his hair! Unlucky! 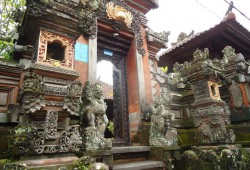 Top 5 Things to do In Bali, Indonesia 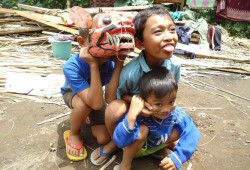 Photo of the Week, Masked Children in Bali, Indonesia