I left for the airport in Bali 12 hours before my flight as it was the last shuttle bus to the airport before my 6AM flight to Kuala Lumpur. Soooo the 11 hours that were spent in the airport were uneventful but very uncomfortable! After scratching my head for eternity I got on my flight and after eating, slept. I got to KL at 9AM after a 4 hour flight (clocks go back an hour) only to have to wait another 6 hours for my flight to Cambodia. I got to Phnom Penh at 4PM and got a moto-taxi to my guest house. After a few beers on my own I decided to join a game of cards with a group of people already in full flow, “I say kind chaps, mind if I play?”. They agreed and the next thing I know I wake up in my bed the next morning with the only recollection being I’d arranged to meet them the next day to sight-see.

A Tuk-Tuk to the Killing Fields was 1st on the list and believe me, this is not a place to be visited with a hangover! It shows the graves of thousands of people murdered during the ‘Pol Pot Ere’. These are not the graves we have back home, these are mass graves with 450 people in, men, women, children. There are bones still poking out of the ground that get unearthed when it rains! Next was S-21, the jail and torture house you went to before your fate was cemented at the Killing Fields. It was a converted school, by that I mean, it used to be a school and it was converted into a torture house! Mug shots of some of the victims lined the walls, there were hundreds of photos! Again men, women, children… even a mug shot of a woman holding a baby too young to even know it was in jail! It was interesting but very disturbing at the same time. Back to the hostel and then out for a wonder around the city. To the Independence Monument and then for some dinner, which was a weird seafood salad they tasted of vinegar, I hate vinegar! After a quick internet stop I retreated to my room as to avoid a repeat of the night before, I had an early bus to Kep the next morning. 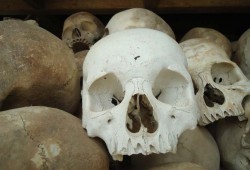 Photo of the Week, Skulls of the Killing Fields, Cambodia