The trip to Jogja was eventful enough with us setting off from Pandangaran early in the morning by walking to the local bus stop. We got the bus that could hold about 20 people and set off on our way to the train station. The road to the train station was less than smooth and we spent more time off our seats that actually sat in them. The bus did have 2 amps though and pumped out Justin Beaver most of the way along with a few other song we have all come to hate. To the train station and we got our tickets for, what was looking to be a very busy journey. We were not wrong, as soon as the train stopped we had to fight our way on with our bags! I tried 3 carriages before someone actually let me on the train! To say it was overcrowded was an understatement and we could see Marcus getting stressed out as we got started on the 4 hour ride.

People selling everything from food to hair clips, caps to massages, were all there. Every 30-40 seconds someone would push past, then another and another and so on. I did not find a seat for the 1st 2 hours of the journey as the coach was so full but eventually got one. I sat across from an Indonesian guy taking pictures of Marcus as he slept, weird!

We got to Jogja and I was starting to feel run down from the amount of traveling I had done over the last 3 days. I developed a cold during an epic 3 hour game of Ludo in a bar eating pizza and drinking beer. After a walk round town we bumped into Irene and had a beer or two with her new found Indonesian friends. We then headed to the Indomart to get some beer but ended up talking to a group of Indonesian guys claiming to be ‘mods’. Constantly chanting ‘we are the mods, we are the mods…’, it was surreal! Back to our hostel round the maze of back streets and off to bed.

Next day my cold had taken over and I only left my bed to go to pharmacy and the Indomart for water. I decided it was best to rest up and get rid of the cold ASAP as we all wanted to climb a local volcano, Mount Merapi.

Next day I woke up still feeling bad but we decided to book the tour up Merapi anyway. It was not until 1AM the following morning so I had the whole day to recover. I did not recover but still set off to climb the volcano anyway. We set off around 10PM that night and arrived at the foot of the volcano around midnight. We started the steep trek up the volcano at 1AM as planned and I quickly found out this was going to be a bigger strain on me than anyone else!

I was short of breath by the time we had finished the 1st 30 minute section and felt sick for the next hour or so. I took it slow but it was very hard work climbing a volcano, with a cold, sweating but freezing at the same time, oh and also, we were in the pitch black of the night. Merapi is still an active volcano and erupted in October 2010 and was still erupting in November 2010! After 4 hours and a 9KM hike up we reached the plateau. Still too dark we had to wait for sunrise and all huddle together for warmth. After sunrise and some spectacular pictures we started our accent to the top. 300M left but it was no longer a jungle trek, but a shear face full of loose volcanic rock.

Feeling pretty bad by this point I made it up only 3/4 of the way everyone else did, this is due to me falling down and sliding with the loose rocks down about 20M. My hands, jean shorts and arms were cut up. As the rest began to climb down our guide dislodged a large piece of volcanic rock and it fell towards me at great speed. Unable to get out of the way in time it caught my shin and cut me pretty bad. Everyone above me then had to wait for me to climb down for fear of an avalanche of rocks.

The views, as you can see from the photos, from the top were amazing! Truly stunning outlook not even done justice by the photos below. We made out way down as the sun came up, the jackets came off and we were down in 3 hours. After a pancake we jumped back into our van and headed back to Jogja.

Next day we hired bikes and headed to a Buddhist temple called Borobodur. After the ticket price in and the fact it billed itself as the biggest Buddhist temple in the world, we were disappointed to find out it was just another temple. It was the same all the way around and although it was impressive in it’s own right, we did not feel that way due to spending so much to get in. We biked around for the rest of the day and then headed back to Jogja to book our bus ticket to Bromo. 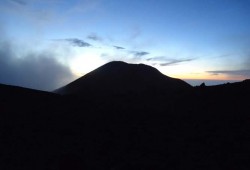 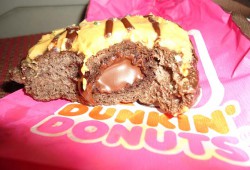