After our flight we arrived in KL pretty late so as soon as we got to China town we took the 1st room offered. It was awful and I swear I saw a giant rat jump out of the window as we walked in! (Maybe not giant but it was big enough!). After some much needed rest after a day and half traveling we got our bearings and went for some brunch.

We strolled round the market and also found some new accommodation to move into immediately! We moved the bags across town and then went in search of KFC. We had arranged to meet Jase and Ed at 8PM that night outside Nando’s. So we got ready and got down there for exactly 8PM. After waiting for 30 mins and thinking we had been stood up I decided to ask the time in Nando’s, it was 9.30PM! We had been going off my iPhone’s time but I had forgot to put it to Malaysia time, we were still working off Thai time!

Up bright and early to go to the Petronas Towers next morning but at 6.50AM neither of us could be bothered, back to sleep and up about 10AM instead. We got some brunch then headed to the local bus station to visit Batu Caves, a 45 min journey away. Giant statue outside was amazing but the Indian guy who took our photo (not shown below as it was so bad) was clearly not an amazing photographer! We had half of us in and half the statue at a wonky angle.

We got the train back into KL Sentral (not a typo) and had a power nap before meeting Ed, Jase and Rachel at the correct time tonight! We, well I say we, I mean I went to McDonald’s before heading to the cinema to watch ‘The Tourist’. Pretty awful film but Krispy Kreme made up for that with a Peanut Butter offering. Lots of popcorn and before you knew it I was back in McDonald’s trying their new ‘Prosperity’ burger… not one to be tried again either!

Following morning we actually stopped being lazy and got up to see the Petronas Towers. After Brogan got us lost with her dodgy orientation skills, I took over and got us there in no time! (shush Brogan, you know it happened exactly like that!). 3 hour wait for tickets to the Sky Bridge so we decided to get some pictures from the park and go to the Aquarium with the money instead. Great decision! Saw so many fish including sharks, rays and eels. We watched feeding time which was quite a frenzy before heading to the park with an ice cream. Which after a bite Brogan decided to almost blow all the trees down in one foul swoop. We admired the technique of joggers in the park as they were using a technique we had never seen before (run really slow but never move your arms from your side, and our favorite was run really slow but move your arms in every direction possible at exactly the same time!).

After another quick power nap we decided to climb the KL tower for sunset. I got some of the best pictures of my trip as the sun is setting and the night begins in KL (last photo below is one of them). We then had a mad rush back to our hostel, pay, get our bags and then rush to the train station in the hope we did not miss our booked ticket out of there. We made it and set off on our way to Langkawi. 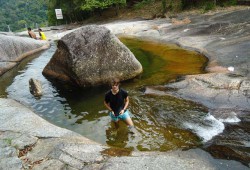