So I have made it from where I started to where I must bring this little adventure to a close, Bangkok. Bangkok is an amazing city and you could stay here for two weeks and still not do everything. I spent a week here and tried to cram as much as I could into that.

I arrived here after a pretty long bus journey from Battambong, Cambodia. I made my final border crossing back into Thailand and it really did feel good walking across that border. As good as the rest of Asia is, Thailand just welcomes you with open arms weather you want it to or not.

I walked around Khao San, Rambuttri and the surrounding area to find a guest house but got Full or too expensive thrown in my face. I eventually got a place but paid quite a lot for my concrete floor box. I gave up for today after 10 hours traveling and took it. I wasted no time in getting out of the GH and also wasted no time in getting a Phad Thai and a Chang beer. I had a quiet one and got a great nights sleep just far enough away from the noise of Khao San.

Next morning I got up early to find cheaper accommodation and found Lek Guest House (thanks Brogan) right in the center of Khao San. It would save my wallet 110 Baht a night, it would also save my body from the amount of sleep required to be happy in a morning! Transferred my bag across and was ready to tackle Bangkok. This is my 3rd time in Bangkok but have never actually done anything cultural. So now was the time.

Few temples on the way to the Grand Palace and I had to lend long trousers so I was less disrespectful! Walked around an impressive Wat (temple in Thailand is called a Wat) inside the grounds and then on to the Grand Palace. It’s quite a sight and you could see a King making it his home. Half way round and could sense I was not feeling well. Fever was setting in.

I walked back to Khao San and got lunch on the way. 25B street food is the best! I slept the rest of the afternoon and then got supplies for the following day in the evening. I spent the next two days sleeping and relaxing, getting rid of my throat infection ASAP so i could get on with seeing Bangkok.

I was feeling much better and had saved a little money so went to Ayuttaya via my own head and got there a lot quicker than expected (i thought the bus was 3 hours long, it was 1). I saw the old capital of Thailand/Siam and the ruined temples of the area. I hired a bike and rode around in the sun all day. Only problem was it had been freezing in Bangkok the last 4 days, so instead of taking the sun creme, I took the rain jacket. I came out of the day looking a little pink, the 1st time in 6 months I burnt and I knew it was happening. Gutted. Not too bad though as I got to shade as much as I could. Back to Bangkok and celebrated feeling better with a Burger King! Why not?! I’m on holiday!

After a well deserved lie in after the last two fast paced days I headed to Jatujak (pronounced Chatuchak) market to see what all the fuss was about and to get some gifts with my remaining money. To say this thing is vast is a bit of an understatement, it is immensely big, thousands upon thousands of stalls. Refreshingly it was not all the same junk you find at a lot of markets here, I mean its there but there is so much more interesting stuff too. Take the pet section, if your looking for an exotic pet they pretty much have the lot: Siamese Fighting Fish, Squirrels, Snakes, Turtles, Tarantulas, Parrots, Macaws, Marine fish including sea snakes which are poisonous! I’m pretty sure one stall was selling a Stone Fish too which is also deadly! They had dogs in cages, cats, puppies and I even saw a Cock fight… in the middle of the market!!!

I walked around for 3 hours and got completely lost for most of it but, I never thought I’d say this about a market, it was a huge amount of fun! It was just the feeling the whole way round you never knew what you were going to see next! Pets, Arts, Crafts, Garden Fences, Ceramics, Woodwork, Food, Performers, Kitchen appliances… you name it you can more than likely buy it. After an exhausting 3 hours of seeing as much as I could, and also seeing a lot of it twice due to going round in circles, I decided to get the bus back to Khao San. Armed with all my gifts I jumped on and sat down, my conductor was far too lazy to come and charge me for a ticket so I got back for free. She even told me when to get off, but not leaving her seat of course!

As I’m sat here writing this, it’s a Sunday night in Bangkok. My last night in Asia for the foreseeable future. I have had some of the best times of my life over the last 6 months and have met some of the most amazing people. Without those people the places would not mean anywhere near as much. Thank you to everyone who has shared this experience with me (especially Ed and Jase), it’s been a roller coaster ride from my motorbike crash into a ditch to climbing one of the highest volcano’s in Java (Merapi). Up and down you could say, but I would not change a thing (even being tortured with iodine for 14 days in a row by Thai and Laos hospital staff!). 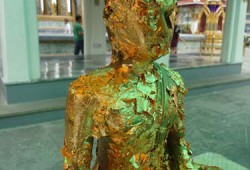