I got an early bus to Battambong and got there in about 4 hours. I got a room in Chhya hotel and went for a walk around and food. I got ripped off at the market for average food, falang prices for sure! After a walk around and seeing there was nothing in town I booked at Tuk-Tuk for the next day to show me the sights as they were all outside the town. Well with nothing else to do from 3PM what do you think I got up to? That’s right I found a bar and drank for about 6 hours! Don’t worry I paced myself as I actually wanted to find my room.

Next morning after brekkie my Tuk-Tuk driver said he had another person to come. So I met Steph (Holland) and we set off on our way to the Bamboo train. We got pushed back to the start twice before actually getting going. Half way down we bumped into another Bamboo train coming at us. Its a single track so they got off. They dismantle the train and then re-build it after we get rolled past! Quite something. After a quick tour of a village we headed back an me and Steph each got to drive the train half way back. I say drive, I mean hold a stick in place so the engine does not fall to pieces!

We then headed to the mountain, which was more like a big hill with caves in it. We dragged our driver with us to give us the tour. We went to the killing caves and saw the temple at the top. Our driver Chi was a bit crazy and at one point was listening to Blue or 5 or some old boy band on speaker. He did not stop making Cambodian jokes the whole way round that neither me or Steph understood, Chi found them all funny though! Back to the bottom and it was time to wait for the spectacle of bats leaving their cave. When I say there was a lot, I mean there were well over a million bats and you shall see what I mean when I upload a video. It was a constant stream of bats for about 25-30 minutes. It was one of the most amazing sights I have ever seen. Unbelievable!

On the way back Chi told us there was a huge concert going on. Me and Steph went to check it out with a well deserved beer. It was huge and we later found out it was an opening party for a shopping mall. Why cant they just cut a red ribbon like normal people?! There were thousands there and to top it off, armed guards all over the place! At mall opening! Armed guards!

Back to the hostel and I went to chat on skype and to get a well deserved burger and chips (you can see it on my facebook wall). Back to my room with a beer and watched the England v Wales game on cable. Packed my bag and got an early-ish night. 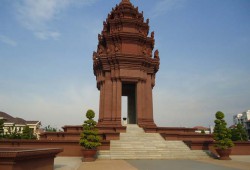