So I feel like I am far enough away from Montevideo now to say what went on (for the sake of family and friends really). Soooo first night, someone was shot in the leg 15 paces from our hostel door. We later found out that the Police had apprehended a gang of bank robbers and a shootout took place (we could still see blood on the path 2 days later so I took a photo thats in the gallery below)! Not the greatest start we had hoped for!

After 2 days of settling into our 12 bed dorm we were pretty comfortable with the people we were sharing with, or so we thought. I worked all morning on my laptop, packed it away into a locker and with a hefty lock made sure everything was as safe as possible. Off to the shops to pick up food, cook food, eat food.

Made our way back up to the locker to see it had been ripped off its hinges and my laptop, Brogans iPod and purse were all missing. We felt sick.

After much speculation as to who had done this we narrowed it down to one person. Off to the Police Station to file our report with the help of Gregory from our hostel, to help with the Spanish! 3 hours later our statement was complete.

After the hostel emailed every hostel in Montevideo to see if the guy who had ran off without paying & with our stuff checks in anywhere else. 6 hours later we get a call to say he had checked in 3 blocks away and that we should come down. We waited in the hostel for about 5 minutes and then the doorbell rang, he popped his head round the door, saw me, slammed the door and ran. 2 Brazilian guys (who he had also robbed of 1000 Reales) and I chased after him down the street.

We found him hiding behind a tree with his scarf round his head trying to hide. After searching his 2 empty rucksacks and finding nothing in either we grabbed hold of him and marched him to the Police Station where we proceeded to wait another 4 hours to find out what we were doing next. The Police found 600 Reales stuffed up the guys anus inside a condom, which he said was for his upcoming trip to Brazil!

Next day we had to go to court to give a second statement to try and convict the guy who was travelling on a Swiss passport but was actually from Honduras. We waited from 9AM until 2PM before we were seen. Short of which was if no-one saw him do it, where is the proof. So we left and it was down to the insurance to pay out. I’m not going into too much detail but after being miss sold insurance and them telling me they were not paying out, I complained and boxed them into a corner and they are now in the process of paying me.

I turned up a little worse for wear after being up until 6AM with the hostel owner feeding me whiskey and talking at length about hostel security. So at 11AM when the tour started I was still in the night before and drunk. I’m sure I’m not the first, and probably not the last. But still not great.

A very nice city on the whole but it’s not like Buenos Aires where the city never stops, it can get quite quiet, especially when you spend 2 weeks there like I had to. Not by choice I might add.

It wasn’t all bad at Willy Fog hostel as in the 2 weeks we got to know some really great people including the hostel staff that were more than helpful with everything that had happened. Still, if you go there, be careful as the lockers are poor, I mean really poor.

Not a bad city but for my experience I was kind of glad to move on and begin travelling again. 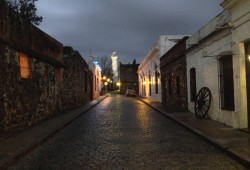