Swimming in Piranha and Caiman infested waters, Toucans and Macaws everywhere, I was in heaven!

Being a huge fan of wildlife and nature we booked a, originally, 1 night stay but we were told we would do more activities by the tour company, when it turns out we would miss out on some great stuff so I made them extend our stay to 2 nights to fit it all in, for free.

The Pantanal is one of the biggest and most diverse lowland swamps in the world and during the dry season (June to September) limited water brings lots of animals to the same water holes, so in theory you see a lot of animals in a tighter space. 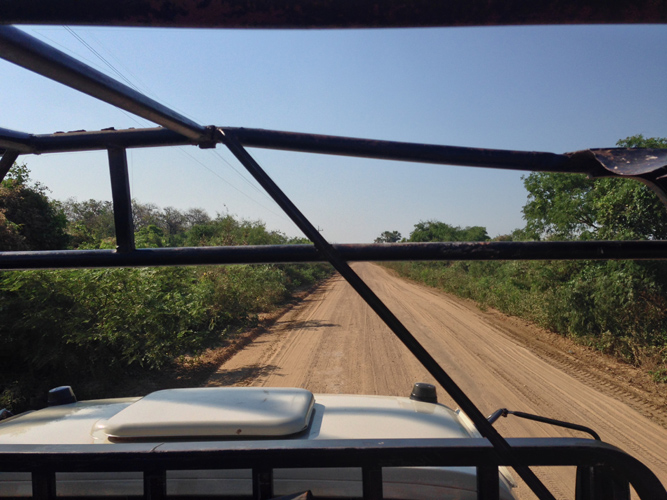 It’s 38KM to the farm we were staying at so they take it semi slow and point out animals for you along the way.

Great introduction to the Pantanal as we saw quite a few things I had never seen in the wild.

Toucans, Capybaras, Hawks, Caimans, Ibis, Stalks, Lizards and many more birds I couldn’t for the life of me remember their names.

Exactly the same as the Jeep Safari but, you guessed it, at night.

We set off at 6PM, right after a stunning sunset, with a huge torch that our guide, Nick, was in control of. 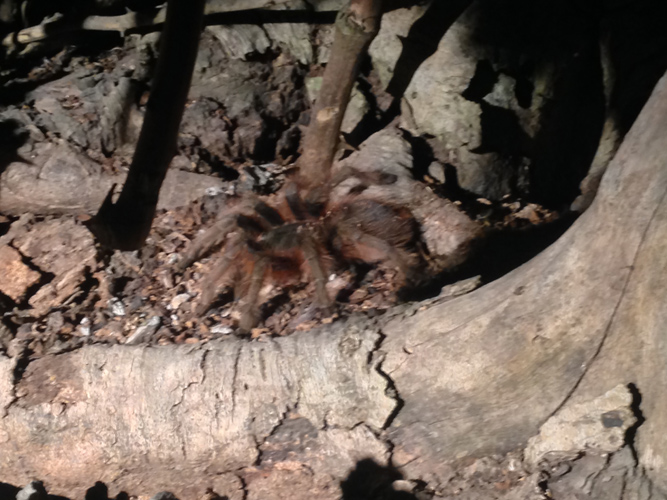 On the way we saw a pair of blue and yellow Macaws pretty close to our Jeep. 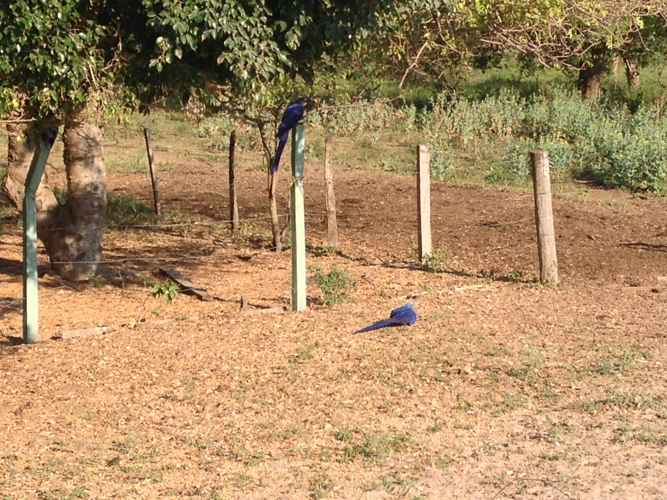 The river here isn’t the same as in Bonito, in fact its quite the opposite. You can’t see much over 5 centimetres let alone 20 meters!

Great day out though with the wind in my hair (what, theres still some, right?) and animals everywhere.

Mainly it was birds but to add to the collection above we saw an Otter swimming and a few Howler Monkeys in the trees. We added so many more birds too but remembering names is not a strong point of mine. 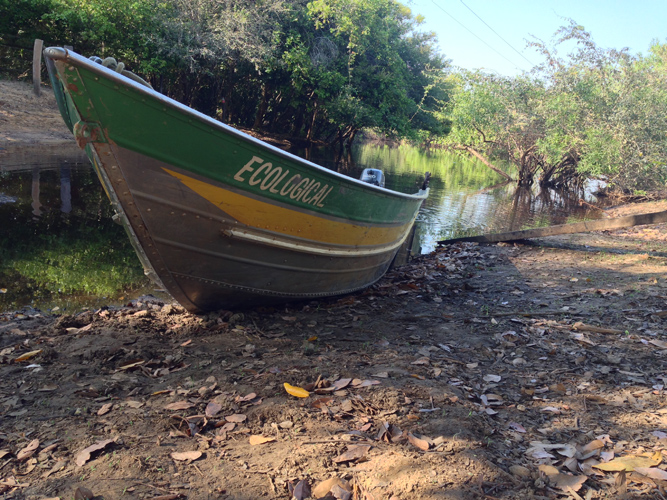 We then got the option to swim in the river, this was about 5 minutes after almost hitting a caiman in said river. The waters are also infested with Piranhas. So of course I was first to jump in and only 1 other guy out of our group of 7 would join me. Brave or stupid, you decide.

This for me was, I’d hoped, going to be the pièce de résistance. I wanted to see an Anaconda and if I was going to see one anywhere it would be feeling it bare foot through knee height swamp water. 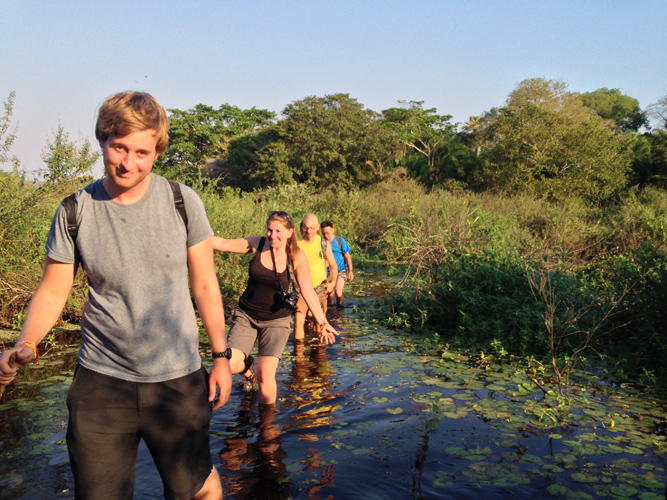 It turns out it wasn’t going to be. But it was still fun non the less wading through murky water trying to keep my balance then out the other side into jungle.

The only addition we made was seeing an Armadillo for about 10 seconds before it ran off and hid. We saw more blue and yellow Macaws and also some Howler Monkeys closer up which was great.

Probably not the wisest thing to go off wondering around the Pantanal on foot in the pitch black without a guide but we were determined to make the most of it and spot some animals by ourselves. So a group of 6 of us set off in the vain hope of spotting something amazing we hadn’t seen before.

We had a blast speculating about what we would do if we came face to face with a Jaguar but luckily we didn’t need the tactical plan after all. We did though spot some more Capybaras by the side of the road and Caimans in the water off a bridge. After about 1KM we gave up and walked back.

So in the same sort of water I went swimming in and waded through barefoot we dangled some meat from a hook on a bridge and caught Piranhas. We saw some deer on the way along with lots of Parakeets.

Crazy to think they were in there while I was swimming in the river and again walking in the swamp. 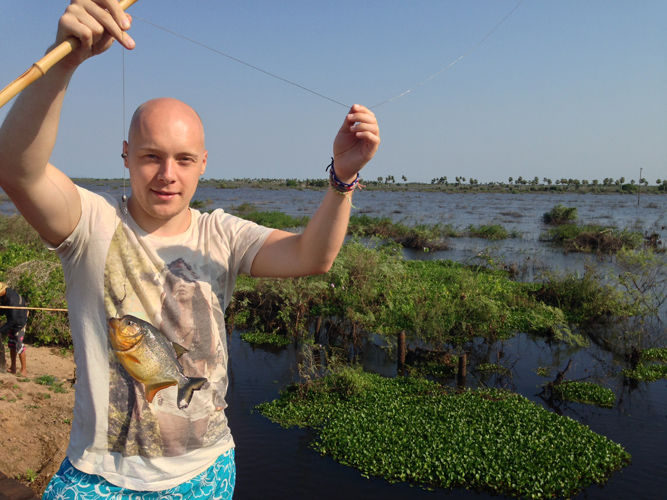 The bridge was over swamp rather than river so was very still. Armed with a bamboo stick, some line, a hook and some meat we set about feeding the Piranhas.

For a while thats exactly what we did, feed them. Sometimes it took 3 or 4 seconds for the bait to disappear which was very frustrating! I managed to catch one in about an hour until we ran out of bait. They sure do swarm and you can feel everything they are doing under the water tugging the meat on the hook around. Lot of power!

We were supposed to be there for over 2 hours but Nick didn’t bring enough bait so after he swung his machete through the water 3 times to create more bait (and failed) we were told to walk down the dirt road in the blistering heat until our lift turned up 30 minutes later.

We made it back to camp for lunch and to eat the Piranhas we caught, deep fried. Not a lot of meat on them for the amount they took from us!

An amazing experience but there were a couple of things that bothered me about it. The farms had fenced off their land which while you were near the road felt like it was a little tame and not really that wild even though you were surrounded by macaws and caiman no matter where you were.

Also our guide ‘Nick’ (not his real name but thats what he said was best to call him) was the least enthusiastic person on the planet. I think he lost the will to do these tours many moons ago. My favourite quote from Nick was: “To me it’s just a Jaguar, to you it’s something special”. The quote of a man who does not enjoy his job.

Maybe I would be the same after 20 years doing the same thing, people get bored of the office right, maybe the Pantanal is Nick’s office and he can’t wait to get the hell away from beautiful and exotic animals, not to mention the beautiful sunsets and a night sky that was ripped out of a Disney movie and stuck in front of us.

I should of asked him to swap. He can have my ‘office’ job (i say this while working in South America! I know, I’m an arsehole) and I’ll live there giving tours to people, I mean I wouldn’t know how to spot animals like him but I’d at least try to look like I’m having fun. I didn’t want him to run up to me every time we saw a caiman and be like, “Jack, Jack, OMG, did you see that, it was a caiman the size of me!!”, but at the very least get the group involved and fain interest.

He actually ended up being the butt of all the jokes due to his miserable personality. We got the feeling he wasn’t the only guide on the ‘Ecological’ tour that felt that way either.

Great place, amazing animals with a great group of people. Shit guide but still we enjoyed it But as Kirsty (one of the tourists in our group) said “If it wasn’t for the group we had it would probably have been really disappointing”. 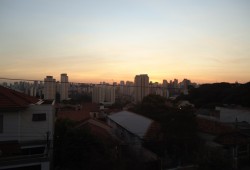 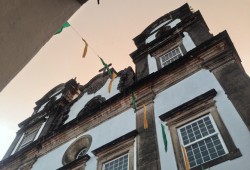