Back to Salvador for a couple of days to experience the madness that is a Tuesday night. Yes, a Tuesday. We also went to see a turtle conservation project (Projeto Tamar) at Praia do Forte about 2 hours down the coast from Salvador.

We made the mistake of taking the local bus to the bus station, either that or we got on the longest bus known to man as it took us 2 hours to do a 20 minute journey, but at least we got to tour every street in Salvador, twice.

We then took another bus from the bus station, which was around 1 and a half hours, down the coast to Praia do Forte where the turtles were. 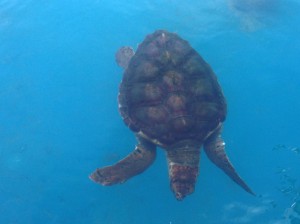 It was well worth the entry fee, especially when you haggle for student discount, with loads to see once inside. Got some great photos of some baby turtles and also stayed around for feeding time.

It was also an educational afternoon as it was full of information about turtles in the wild and how the project has increased their numbers significantly. 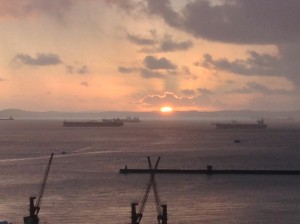 In the square made famous by Michael Jackson singing ‘They don’t really care about us’ we were treated to an amazing samba drum show. It was similar to La Bomba de Tiempo in Buenos Aires but was probably marginally better. Oh and it was free.

Little annoyed that I couldn’t get a video of the whole thing but as you may of read in the last blog on Salvador that the streets aren’t the place to show off expensive gadgets.

Due to the amount of people on the streets and the risk of being pick pocketed on the way round we were told to leave cameras and valuables behind and take only a small amount of money just in case. So the night is committed to my memory and words.

We started off on the steps in Pelourinho with a live band playing a mixture of samba and 70s classics while street vendors (random people with coolers) dished out ice cold beers and the national drink, the Caipirinha.

The second party, after a Caipirinha or two to ‘loosen up’, was another live band which I have no idea what they were playing but I do know that everyone was loving it and the most unlikely characters were dancing as hard as they could and so were we.

It seemed like most of the local area were out for the Tuesday night party regardless of age. I don’t think I have ever seen a 60 year old couple in the middle of a party dancing harder than the 20 somethings around them.

Finally we went to the ‘home of samba’ which was right opposite our hostel (Açai Hostel, best hostel, ever.) in the form of a tiny little club with a samba band hidden somewhere beneath the tangle of sweaty bodies. It was tiny, and it was packed to the rafters, so much so it was a fight to get in and out with the party spilled out into the street for those who couldn’t handle the heat in there or just could not physically get in.

We lasted about 25 minutes in there until we needed air. An amazing all round party with a great atmosphere and some great people too. By far the best night out in Brazil. 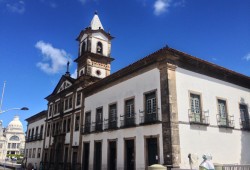